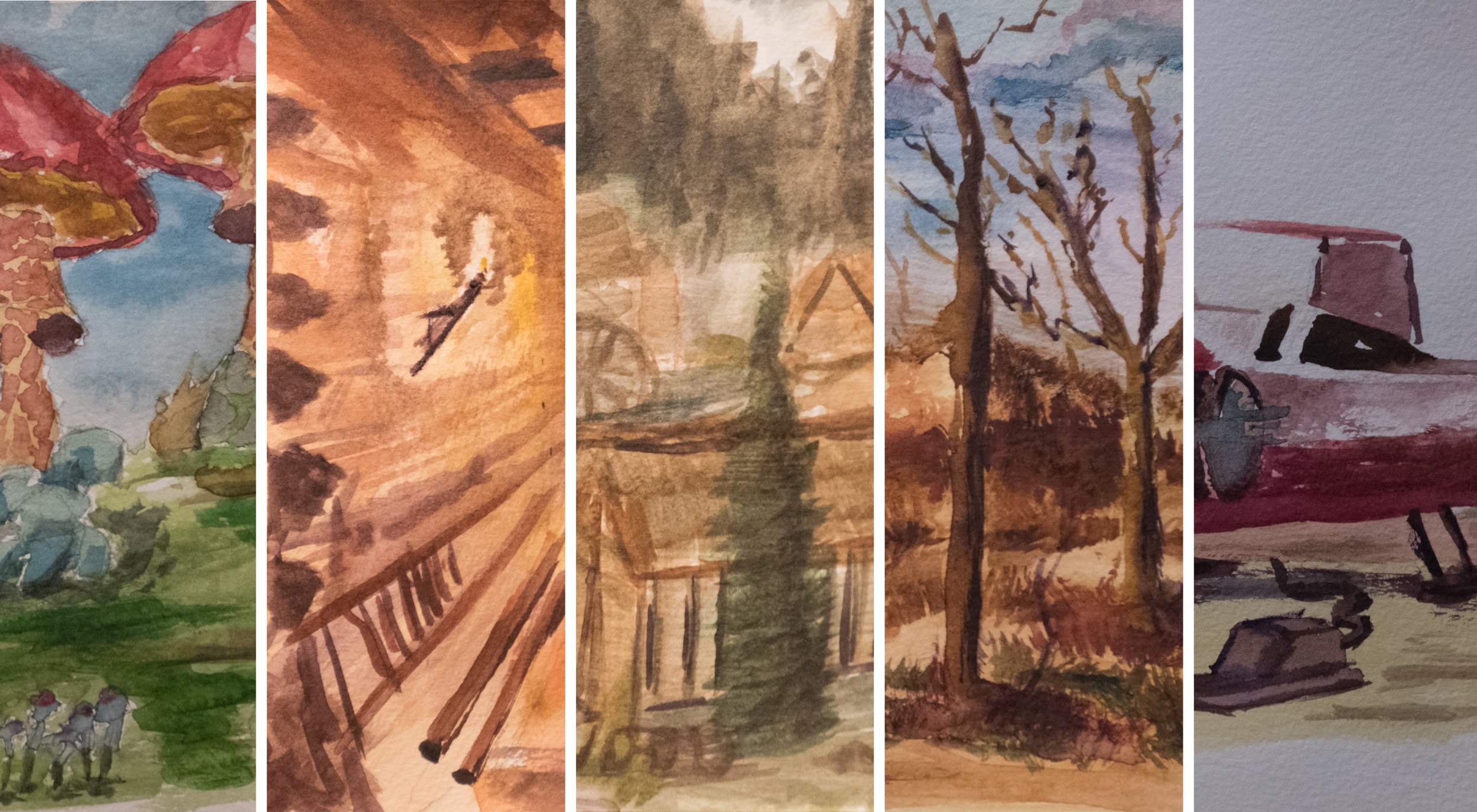 What makes a game good for plein air painting?

What makes a game good for plein air painting?

When you're using a game as painting inspiration, the game must get out of your way. Most games are built to tell a story or deliver a challenge to the player. We may not want to participate in any of that. The easier it is to opt-out, the better. Usually, these games will label themselves as open-world, sandbox, or exploration games. Not all games with those labels work out.

The first game that came to mind when I started was Skyrim. From what I remembered of it, it seemed perfect. It gives you the freedom to roam a sort of alpine Bob-Ross-esque setting. And for the most part, that guess panned out to be true. It wasn't perfect, though. I've tried a handful of games now and learned a few things about what makes a game suitable for plein air painting.

If you're plein air painting, you want the freedom to find and choose your subject. You don't want the game to repeatedly tell you, "Hey! Look at this!" You should be able to go where you want. You also don't want to be on a timer. Open World games usually let you freely roam and explore. This is almost a must-have feature for plein air painting from games.

While you're painting, you'll want quick access to the game controls. You'll frequently need to adjust your view and sometimes access menus. Or, you might get attacked by a bear while you're painting. It's also helpful if the controls don't take up too much space. For these two reasons, I think playing with a controller is the way to go if you're painting from a game.

When you paint at an easel in front of a TV (my method), it would be tough to set up a keyboard and mouse. Using a controller is almost a must. If you're using a console game, you'll certainly have no problem. For computer games, be sure to check before buying the game. Luckily most modern games have controller support even on PC. I've only had to rule out a few games over this.

It turns out a lot of open games don't start out so free. I tried several games where the intro to the game is a long railroad of boredom. You don't want games to make you sit through lots of cutscenes and dialog or send you on must-do-to-continue mindless objectives. An open-world game that lets you altogether skip the opening would be amazing, but I have yet to find one.

Skyrim has a little bit of opening monotony, but you can get to the freedom in well under an hour. On the other hand, I'm a couple hours into Kingdom Come: Deliverance and still haven't gotten to the open-world part of the game.

A problem I run into is that it's too easy to get sidetracked into actually playing the game instead of painting. That's may not be a horrible problem, but game quests are usually rabbit holes that lead from one to another. Some games continuously remind you to continue the game. This is really tiresome if your goal is to paint.

Skyrim and Fallout 4, both made by Bethesda, are somewhat easy to avoid the actual game tasks. They won't directly remind you too much, but it's easy to wander into game hooks. The game I've found with the least of this problem, so far, is No Man's Sky. I'm not very far into it, but so far, it's hardly a game at all*. Many reviewers complained when it came out, but this downside is a huge upside when painting.

*I originally wrote this in 2018, since then multiple updates have pushed No Man's Sky more towards having typical game mechanics which obstruct you. Regardless, it has a creative mode, which lets you bypass those mechanics.

Lighting is terrible in sports. It gets better every year, but even in current games, it's still highly unrealistic. In many games, you'll have to take some artistic license and have some understanding of the way real light works to get the most out of plein air painting from games. Many games pair unrealistic lighting with a style that you may or may not want to work with (e.g., Breath of the Wild).

Games with excellent and realistic graphics put less strain on your knowledge about light. They'll have reasonable shadows and reflections. However, they usually won't have secondary lighting or decent occlusion. Forget about things like refraction. If you have no idea what any of this means, just make sure the game you're choosing looks pretty realistic to your eye. It also might be worth taking some time to learn about light. Color and Light is a beloved text on the subject by James Gurney.

Modern games with physically based rendering (PBR) are ideal since they'll have pretty good lighting down to the textures that make up objects in the game. You can usually do a bit of Googling to figure out if the game is made this way. Most new games coming out as of 2018 will use this method.

While not totally required, it's really great if a game simulates an environment. What I mean is that it helps to have features like weather, day/night cycles, happy little squirrels, and wind. It really adds life to the game, and that helps add life to the paintings you create.

Another thing that can interrupt you when painting games is the various things the game does when left idle. You may sit your controller down and not touch it for long periods. What will the game do during that time? I've actually found that a lot of games are okay, luckily.

By default Skyrim and Fallout 4 will spin the camera around your character after a couple minutes. You can't have that. There are some settings you can change in a file on the PC to delay or stop this behavior. But, you can't do that on a console, so those two games are painful to paint on a console.

It's hard to know what it'll do before you buy the game. Most players don't care about this. I plan on reviewing games for the purpose of painting, and I'll be sure to report on this specific behavior.

If you're using games for plein air study, there's a good chance you're doing a solo study. Maybe you'll be able to find someone else to paint with you from a game, but I don't think there are a whole lot of people out there interested in plein air painting from games.

You're going to want your games to support playing alone. You don't want to be holding people back or dependent on others to get around. You might want your games to be a totally single player since you also don't want people to be able to interrupt you. PUBG is not a very good plein air painting game.

So far, I've found no perfect game, which is a complete package. The holy grail of plein air painting games is likely still yet to be realized.

Starting with my next article, I'll begin reviewing games for painting En Game Air. I'll weigh those games against these types of concerns and let you know how they stack up.